Virtual Cathedral  Register of the Sillery mission (Text in... 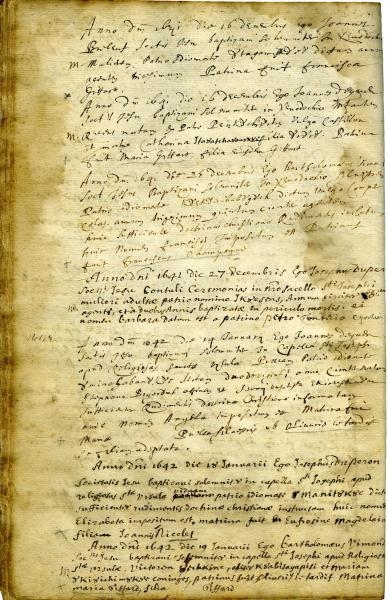 Sillery was initially a Ã¢â¬ÅrÃÂ©ductionÃ¢â¬Â (essentially a reserve) or a place where the Jesuits hoped to settle the nomadic Aboriginals (i.e. reduce them to a settled way of life) and then evangelize them. The Jesuit Paul Lejeune who conceived the project considered it not just advantageous for the bodies and souls of the occupants but also for the fur trade. For the Aboriginals allowing a mission to be established and the ritual of baptism to take place was a way of sealing a diplomatic alliance. The Wendat and some of their allies such as the Nipissing thus became the preferred military and commercial partners of the French.
After 1651 Sillery was officially granted to the Aboriginals by the king under the guardianship of the Jesuits and at this point the term Ã¢â¬ÅmissionÃ¢â¬Â came to be used in reference to Sillery. In 1699 the title of Ã¢â¬ÅseigneurÃ¢â¬Â passed from the hands of the Aboriginals to the Jesuits who had always been the only ones to hold seigneurial rights. Several Aboriginal nations passed through the mission particularly the Montagnais and Algonquin but also the Attikamek Huron Nipissirien and Abenaki. Ã¢â¬ÅKa-MiskouanouangashitÃ¢â¬Â is the name given by the Aboriginals to the cove of Sillery a place where they had gathered for generations because eels could be found there in abundance.
The register of the Sillery mission is one of the oldest from New France. This document contains the baptism records of the Aboriginals and French living in the mission between 1638 and 1690; several burials are also mentioned. The records are signed by various well-known priests including Fathers Paul Lejeune Charles Albanel Gabriel Lalemant Jean de BrÃÂ©beuf and RenÃÂ© Goupil. Moreover many important people from the colony are mentioned as godparents of young Aboriginals. Among those named are Monseigneur Laval Governors Montmagny and Frontenac Jeanne Mance and Madame de La Pelletrie.
The register has a total of 166 pages and in it can be found the baptism records of 1716 Aboriginals 257 French and 5 Metis. Some Aboriginal baptisms took place outside the mission. The page presented in this exhibit includes a baptism on December 16 1641 by Father Jean de BrÃÂ©beuf.