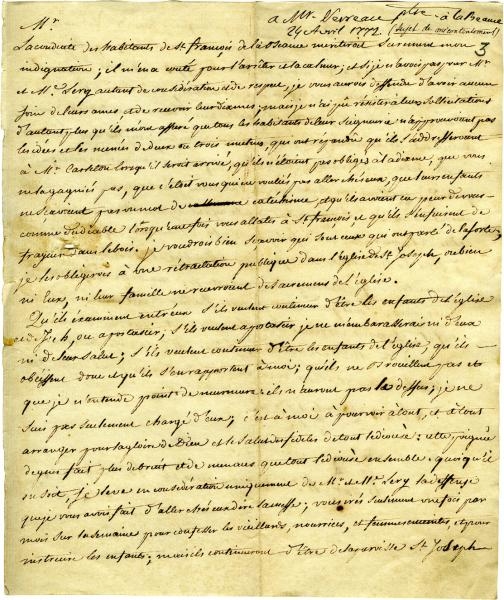 
Throughout the period of New France the bishop worked together with the French government to supervise the population. He had jurisdiction over the churches and parishes as well as the religious communities. On several occasions the bishop attacked the immorality of the inhabitants. For instance he criticized them for supplying the Aboriginals with brandy.
Despite the regime change in 1760 the bishop kept his power under the British government. The Catholic Church however experienced difficulties related to lack of financing (French subsidies ended and there were legal complications to forcing parishioners to pay tithe before 1775) the difficulty recruiting new priests with an aging clergy whose numbers were diminishing after the Conquest and the precarious position of the church with respect to the new British and Anglican rulers. Monseigneur Briand vicar-general and then bishop from 1766 to 1784 advocated respect and reconciliation with the British government to allow the Catholic Church to survive in Canada. He also tried to tightly govern the population which he found more restless since the Conquest.
In the letter presented here the content of which Father Jean-Marie Verreau had to convey to the entire parish population the bishop severely criticizes the conduct of Saint-FranÃÂ§ois de Beauce residents who were not happy with their priest and were asking for a church. The Saint-FranÃÂ§ois parishioners did not want to pay for a priest who did not reside in their parish and asked the bishop to remove the restriction. He did not give in to their threat of writing to Governor Carleton; he told them to apostatize if they were unhappy. Otherwise they were to "be obedient and rely on me."