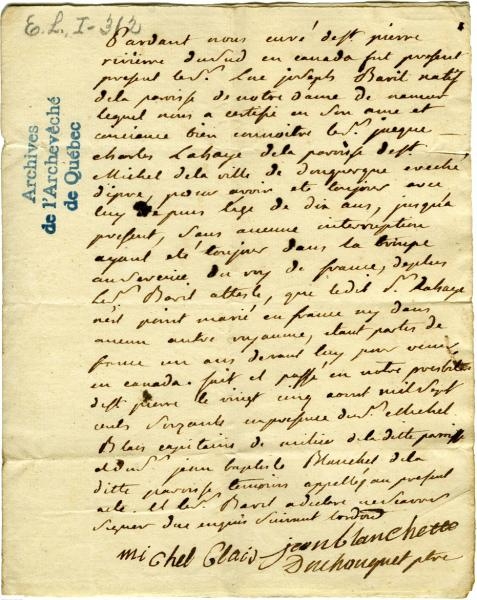 
Very specific rules governed marriages in New France. The spouses had to be at least 14 years old for boys and 12 years old for girls. And up until the age of 30 for men and 25 for women they also had to obtain the consent of their parents. Various things could invalidate the marriage including marrying a cousin of up to the fourth degree or marrying during a forbidden time.
For newcomers to the colony candidates had to prove they were not already married which would prevent bigamy a very serious crime. To do so they had to present to the religious authorities testimonies from people who knew them in France and who would attest that they were single. One of these Ã¢â¬Åtestimonies of freedomÃ¢â¬Â is presented here. Joseph Baril declared to Father Charles Duchouquet of Saint-Pierre de RiviÃÂ¨re-du-Sud that he knew Jacques Charles Lahaye of the city of Dunkerque and that Lahaye had not been Ã¢â¬Åmarried in France or any other kingdom.Ã¢â¬Â Lahaye was married several days later on September 2 1760 to Marie-Claire Garand widow of Joseph Vivier right in the midst of the upheaval caused by the capitulations in Quebec. The colony was occupied by the British armies and Montreal capitulated several weeks after this document was written.
In this document we learn that Lahaye was one of the troops in the service of the King of France; he had to have been sent with the Troupes de la Marine (navy troops) in 1755 to participate in the Seven YearsÃ¢â¬â ¢ War. His marriage to a Canadian is not out of the ordinary since many soldiers and officers did the same during this period. The marriage of soldiers often caused tensions between the governor and the bishop as the former did not like losing the contribution of soldiersÃ¢â¬âof whom there were never enoughÃ¢â¬âand the latter feared the scandal of extramarital relations.