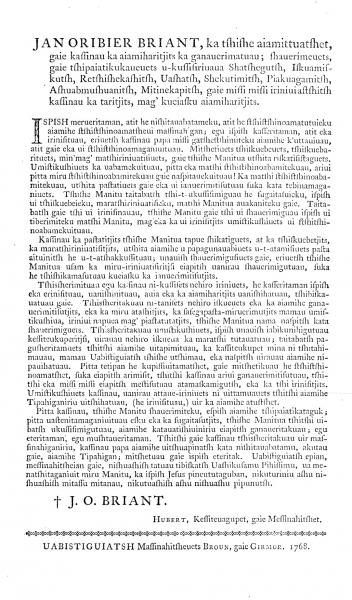 In the early days of the colony the government wanted to encourage marriages between the French and the Aboriginals. Because it was accepted that the natives did not really have a religion they did not represent any threat to the religion of their spouses. Moreover because of the very young age of the future wives (under twelve years old) it was believed that these women could be instructed as desired. Things undoubtedly happened otherwise because this idea was rapidly abandoned and beginning in 1663 the filles du roi were brought in as wives for the existing colonists. The French did however travel all over the territory to trade furs and some of them developed close ties with the AboriginalsÃ¢â¬âparticularly the Aboriginal women.
Monseigneur Briand bishop of Quebec since 1766 was reacting to what he considered the perverted effects of contact between the two cultures. In his pastoral letter of 1768/1769 he addressed his Ã¢â¬ÅchildrenÃ¢â¬Â the Montagnais of Tadoussac and other areas. He expressed his sadness at the drunkenness and impurity of some Aboriginals who were sometimes following the bad example set by the Canadians with whom they mixed. The bishop reminded them that any sin displeases God but that these two in particular Ã¢â¬Åblind a manÃ¢â¬â ¢s heart to such an extent that [Ã¢â¬Â¦] he obtains GodÃ¢â¬â ¢s pardon only with difficulty.Ã¢â¬Â He also reminded the French that it was a crime to make Ã¢â¬ÅSavagesÃ¢â¬Â drunk and to sin against purity with Ã¢â¬ÅSavage womenÃ¢â¬Â and he forbade missionaries from blessing such marriages.
Interestingly this pastoral letter was one of the first documents printed in the Canadian territory since there was no printer in Quebec before 1764. Moreover the fact that a version of this pastoral letter was printed in the Montagnais language shows that even if the content is moralizing Canadians at the time recognized the specific culture and identity of the Montagnais people. French mastery of this language dates back to the first missionary years of the 17th century.