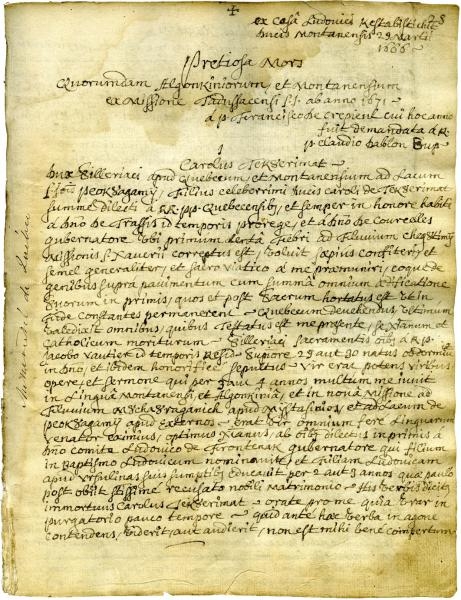 Father FranÃÂ§ois de Crespieul a Jesuit arrived in New France in 1670 at the age of 32. After a year in the CollÃÂ¨ge des Jesuits de QuÃÂ©bec he was sent to Tadoussac as a missionary to the Montagnais. At that time the kingÃ¢â¬â ¢s domain for which he was responsible extended from ÃÅ½le aux Coudres to the Moisi River (Sept-ÃÅ½les) and northward to Lake Mistassini. Crespieul settled among the Aboriginal population learned the Montagnais language and lived nomadically in the very vast territory of his mission. He carried out his task for about thirty years and did not return to Quebec City until 1702 the year of his death.
Much was written by Father Crespieul during his life as a missionary including a journal the Relations remarks and regulations about the Tadoussac mission. These works help us better understand the life of the Aboriginal nations in the 17th century and more importantly the link between these nations and the Catholic religion the missionaries were trying to instil in them.
Within the Aboriginal nations the rites surrounding the death of a chief are very elaborate and include several stages. The mourning stage itself aims to establish a climate of peace and alliance with other nations. The name and title of chief are then given to a successor of the same group so that the chief can thus be reborn. Here FranÃÂ§ois de Crespieul tells of the death of Montagnais chief Charles Negaskaouat or TekoÃÂ¼erimat (which in Montagnais means "he who remembers his ownÃ¢â¬Â) son of Chief NoÃÂ«l Negaskaouat or TekoÃÂ¼erimat. In the Montagnais tradition he died peacefully that is to say surrounded by representatives from foreign nations.
The documentÃ¢â¬âof which the first page is presented hereÃ¢â¬âis entitled Pretiosa mors quorumdam Algonkiniorum et Montanensium (in English "Precious death of certain Algonquin and Montagnais"). Written primarily in Latin but also in French from around 1686 to 1696 it contains the eulogies of 49 Aboriginal Christians and two Jesuit missionaries. The individuals presented in the document are part of various Aboriginal nations: Montagnais Papinachois Ã¢â¬ÅAbitibiensÃ¢â¬Â Algonquin Ã¢â¬ÅMistassiniensÃ¢â¬Â Attikamek Ã¢â¬ÅPeokouagamiensÃ¢â¬Â Etchemin and Ã¢â¬ÅEskimo.Ã¢â¬Â They were chosen because they were important people in their communities or because their deaths were exemplary. For each of them Crespieul wrote a notice that gave an overview of their Christian values and described their Ã¢â¬Ågood death.Ã¢â¬Â