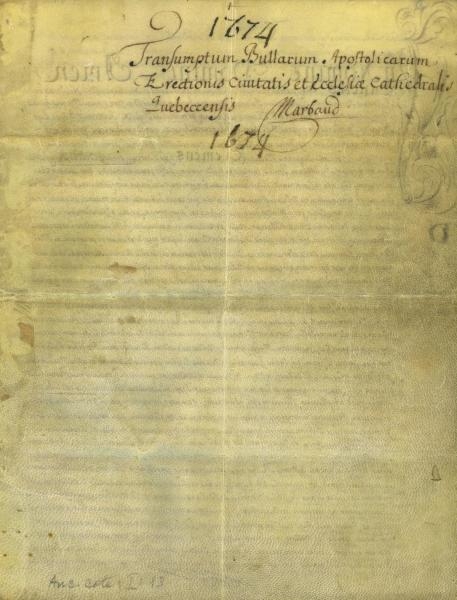 Historical comment
Quebec is the oldest Episcopal See in North America with the exception of Mexico. The first phase of establishing the Church in New France dates back officially to 1615 when the RÃ©collets followed not long after by the Jesuits in 1625 permanently established themselves at Quebec to serve the budding colony and evangelize the Aboriginal tribes.
Already a mission territory directly dependent on the Holy See Quebec was erected a vicariate Apostolic by a Decree of the Propaganda approved by Pope Alexander VII on April 11 1658. The same decree named FranÃ§ois de Laval bishop of Petrea and vicar Apostolic for the kingdom of Canada in North America.
Sixteen years later the Apostolic mission was raised to the rank of diocese directly dependent on the Holy See and on October 1 1674 Clement X signed the bull erecting the new bishopric. Monseigneur de Laval thus became the first bishop of Quebec and his diocese larger than Europe included all the territory over which France had rights or claims that is all of North America except the colonies of New England and Mexico. 1674 marked the end of a missionary church dominated primarily by Jesuits and symbolized the beginning of a Gallican church in the service of the king and organized on the French diocesan model.
As vicar Apostolic and then bishop Monseigneur de Laval was the popeâs representative in New France and the spiritual leader of all residents of his diocese. As such he could ordain priests receive the vows of nuns erect parishes and entrust them to priests. He also had a seat on the Sovereign Council. Monseigneur de Lavalâs time as bishop is marked by centralized management of the secular Churchâs human and material resources. For various reasons the prelate delayed canonically erecting the parishes or instituting permanent presbyteries preferring to concentrate the administration of parish life on the seminary he founded in Quebec City in 1663 with the help of the Missions Ã©trangÃ¨res of Paris. Despite several concessions at the end of the 1670s the bishop delayed the development of the Gallican church to the point where having lost the support of the monarchy he yielded his place to Monseigneur de Saint-Vallier a true architect of the royal project related to parish supervision.
Many documents were issued by Rome in 1674 the two most important being the bull according provisions to the new bishop and the one erecting the Episcopal See. In several ancient dictionaries can be found the following meaning of the word âbullâ: "Papal letters on parchment with a leaden seal.â The document kept by the Archdiocese of Quebec is the transcription (transumptum) of the bull erecting the Episcopal See. This copy was produced in Rome and was sent after the original bull. The document is written in calligraphy on a thick parchment and bears wax seals under paper. The two original bulls have unfortunately long since disappeared.